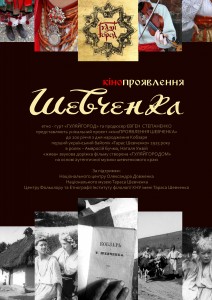 The film consists of several short stories and illustrates the life of Taras Shevchenko – a young man, a soldier, a poet. It became the most successful film projects in 1926.

Specially selected authentic Ukrainian songs and psalms (religious songs) from the poet’s homeland region were chosen and performed in live mode by HulyaiHorod as a modern soundtrack for the silent film. Many of them were performed to the audience for the first time…

fragment of the film: